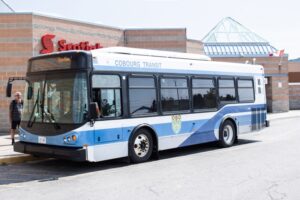 More Transit Discussion at Council: Transit is one of the more contentious  items in the Municipal discussion encyclopedia. Those who need it want it, those who get annoyed that few appear to ride it want to abolish it and of course the taxpayers sitting in their swanky piles resent having to pay for it!

Given these opinions the Town Council has to do something. Not to have a transit system would demonstrate the Cobourg is definitely “Nobourg” and it would show disdain for progressivism. Not to mention annoying the ‘greenies’ and tree-huggers as well showing support for clogging Cobourg’s streets with cars.

The problem is that nobody seems to be able to design a system that works efficiently. The previous system of having two buses drive on two fixed routes stopping at fixed stops at fixed times was deemed to be more expensive and gave less value than the new ‘on-demand’ system. This system depends on smart phone apps to ‘dial-up’ a ride. The drivers would be connected to the rider through the ether and would be able to tell the rider when they would be picked up. This system provides no regularity to those who have timetables to keep and now we are told the system isn’t working properly because of the lack of drivers.

So Council is caught between the ‘taxfighters’, who want to get rid of it (the transit system),  and those who want a ride on a fixed schedule. It appears that Staff/Council will not be able to fix the perceived needed changes, for at least a year, because of the fixed program. It also appears that with an off-hand question from the Mayor he is perhaps throwing out a trial balloon, “Lucas asked if the option of “no transit system” had been considered – since the majority of Towns Cobourg’s size do not have one.” And in another report he elaborated: “He floated the idea that public transit may even be an unaffordable luxury, given that “the majority of communities the size of Cobourg do not supply any transport option. “As we get into these budget deliberations, major decisions are going to have to be made,” he warned. “We need to start also thinking about what is and isn’t essential services in this community, and I just want to think about it when it comes to adding more money to a system that’s a luxury at this time.”