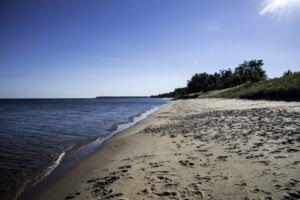 Right of Passage along Shoreline. This  is another contentious subject between the ‘Property Rights” people and those who would like to walk the shoreline. Not a new topic and one pursued by many over the years.

Basically the ‘shorewalkers’ would like the right to walk on the shoreline within a ten foot strip from the water. Obviously the ‘propertyowners’ would like to have any visitors classified as trespassers and banned from their property.

The ‘property owners’ are relying on a quirk of Ontario Land Registration and they own “water-lots”. These lots date from the Centuries ago and the property lines extend into the lake/river. Thus the contention that all the land, lakeshore and water belongs to the property owner. Some owners allow access, others defend their rights to the death. In Cobourg we have a classic example of that where the westerly lot on Lake Ontario at the Factory Creek is fenced and posted. The owner has been seen  on occasion to berate “Trespassers” for invading the property.

The reason this topic has arisen is that the new Mayor of Cobourg has dragged, from the archives a letter written to Cobourg, in 2018 from the City of St Catherines asking for support for such rights. Mayor Cleveland said that several people had asked him for support on the issue and he moved that a letter similar to the one from St. Catharines to be drafted and sent to the premier. Aaron Burchat seconded the motion.

This topic has come before Council and as an environmental constraint line – a 30 metre setback from the shoreline is incorporated in the Official Plan, it has some merit. In fact some years ago, after a fire that destroyed a large house at the end of King St, “Log Hall” the new owner was asked to deed the the newly created environmental strip over to the Town as mandated in the Official Plan. He appealed and the council of the day allowed him to keep the land private. A great pity for if it had gone through the environmental strip would have been the start of a Lakeshore Trail.

It is not as though Council is without tools to create such a trail. The City of Burlington, many years ago had the policy of buying any Lakefront property with such an environmental mandate, severing off the Lakefront and then reselling the property.

But back to the topic in the CobourgNews and its many commenters. Opinion, as usual on this Board is divided between the Taxfighter/Property Owners, with their “Know the price of everything but the value of nothing” attitudes and the Progressives who want the freedom to walk anywhere.

But the bottom line here is that this topic was created by the new Mayor and some wonder just where he is going with his “New Ways”.

An article in the Lindsay Advocate about shoreline property issues